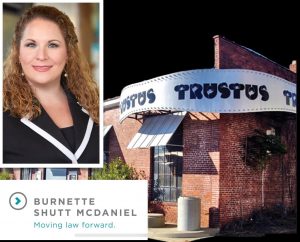 Trustus is an award-winning professional theater troupe that produces original and adapted works by local and national artists.  Rhodes brings to the board both legal knowledge and lifelong involvement with the arts.

The company has grown from its humble roots in an old warehouse in the Vista District. It’s now a half-million-dollar non-profit organization that performs in two venues. Trustus also offers an apprentice company for high school students as well as free clinics that help performers prepare for auditions.

Its current 10-play season includes parodies, contemporary pieces and classics. The next Trustus production, “Cost of Living,” will run from Feb. 22 to March 2. The play was the 2018 Pulitzer Prize winner for Drama. Flex Passes still are available for the current season.

A talented vocalist, Rhodes performed with three musical ensembles as a student at Wofford College. She was member of the Sandlapper Singers, South Carolina’s premiere choral music group, for several seasons.