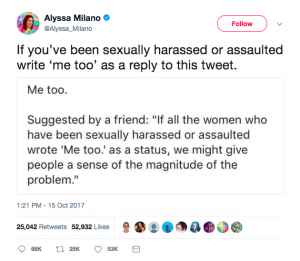 By Nekki Shutt
Attorney at Law

October 15, 2017. That was the day celebrity Alyssa Milano (from Who’s the Boss?, Melrose Place and Charmed) tweeted “If you’ve been sexually harassed or assaulted write “me too” as a reply to this tweet.”

The tsunami had churned below the surface for decades. I and the other lawyers at Burnette Shutt & McDaniel have seen it build throughout our careers. And since October, we’ve seen an increase in inquiries, both from victims of sexual harassment and from companies that want to learn how to prevent claims.

Oh, how things have changed since I handled my first sexual harassment plaintiff’s case 22 years ago.

My client was a beloved professor. Over the 20-plus years in the classroom, she received numerous “teacher of the year” honors.  She was a petite woman, with long dark hair, a constant smile and a twinkle in her eyes.  Like me, she loved a pencil skirt and rocked some stiletto heels.

Every year, she got glowing, exemplary performance evaluations . . . that was, until one year, when a new dean came in and gave her her first below-average performance review.

She was stunned – the feeling that all of us Type As get once or twice in our lives when someone tells us we are less than perfect.  She went to the dean, expressed her complete dismay and asked what she could do to improve.

The dean did what Hollywood producer Harvey Weinstein would have done.  He walked around to the other side of his desk and sat next to my client. He slipped his hand up her skirt between her legs, squeezed her thigh, looked into her eyes and told her that she knew exactly what she could do to get a better job evaluation.

I took the professor’s case to federal court. I spent hundreds of hours on written discovery, subpoenas, depositions and motions.  It was a battle royale.  Me on one side and three defense lawyers on the other.

Right before trial, the federal judge assigned to the case asked another judge to act as our mediator.  The mediating judge was a woman, about my client’s age.  I will never forget what she told me during that mediation.  She said something to the effect that, “Nekki, jurors are so inured to sexual harassment claims.  Unless your client has been raped, you are unlikely to get punitive damages.”

I can still conjure the stunned look on my face. I couldn’t conceive of why our system wouldn’t protect my client and punish the outrageous behavior of that dean.  To me, it was a clear-cut case of employment discrimination.

Decades later, a powerful person faced accusations of misconduct at a rate of nearly one every 20 hours after Weinstein was exposed. Time magazine identified the movement as “2017 Person of the Year.”

Milano didn’t actually start the #MeToo movement. Credit for that goes to Tarana Burke, a civil rights activist who began using the phrase in 2006 to raise awareness of sexual assault and abuse.

Our employer clients fear having a local Harvey Weinstein among their managers.  We are advising employers to do Title VII training this year for all managers. They also should train front-line folks on how to handle complaints.

In short, sexual harassment claims are back. If #MeToo motivates employers to clean house, do more training and take complaints more seriously, then that’s moving the law forward in my book.

Hey, and by the way, #MeToo. And if you are a woman reading this blog, it will surprise me if you don’t respond with #MeToo.

Nekki Shutt is a co-founder of Burnette Shutt & McDaniel. She’s an employment law specialist and skilled litigator. Reach her at 803.904.7921 or nshutt@burnetteshutt.law.